Each of us has a drawer or two in the house, or a couple boxes out in the garage, up in the attic, down in the basement — all full of treasures. Tokens that mean something to us.

I take these things out of hiding and give them a new presence, life, and beauty.

My mosaics make these items permanent, like the memories they evoke. 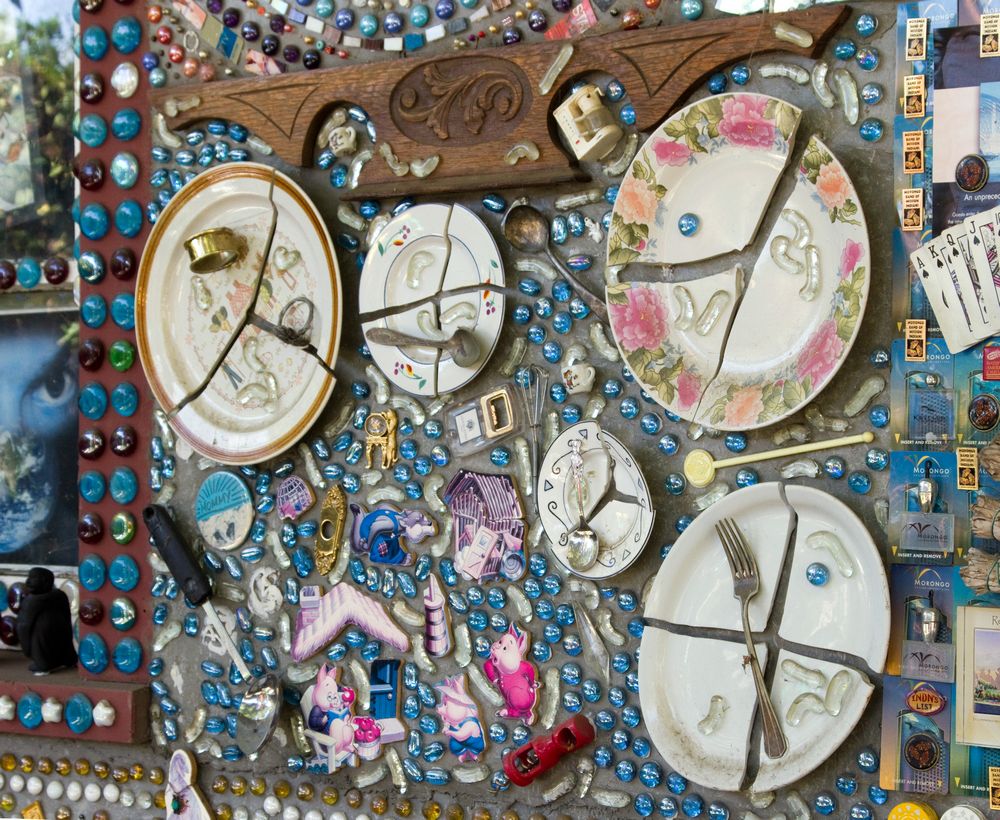 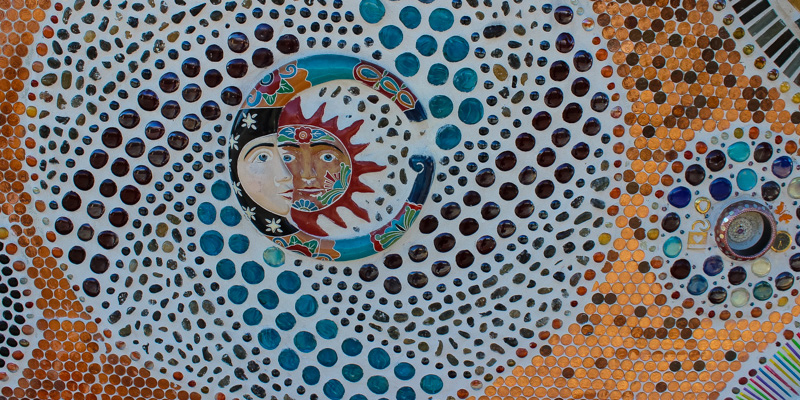 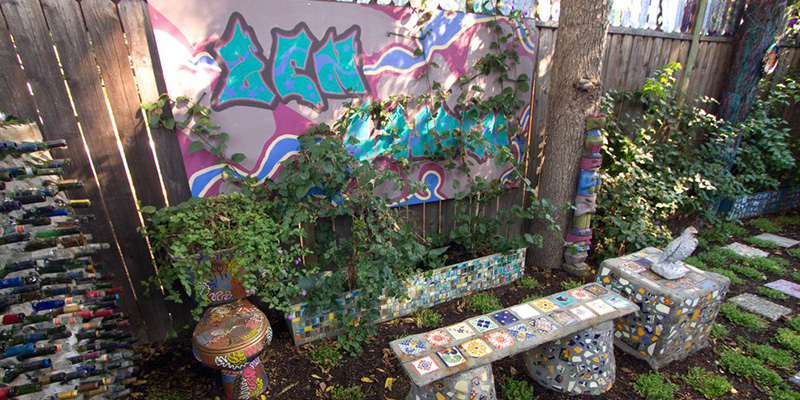 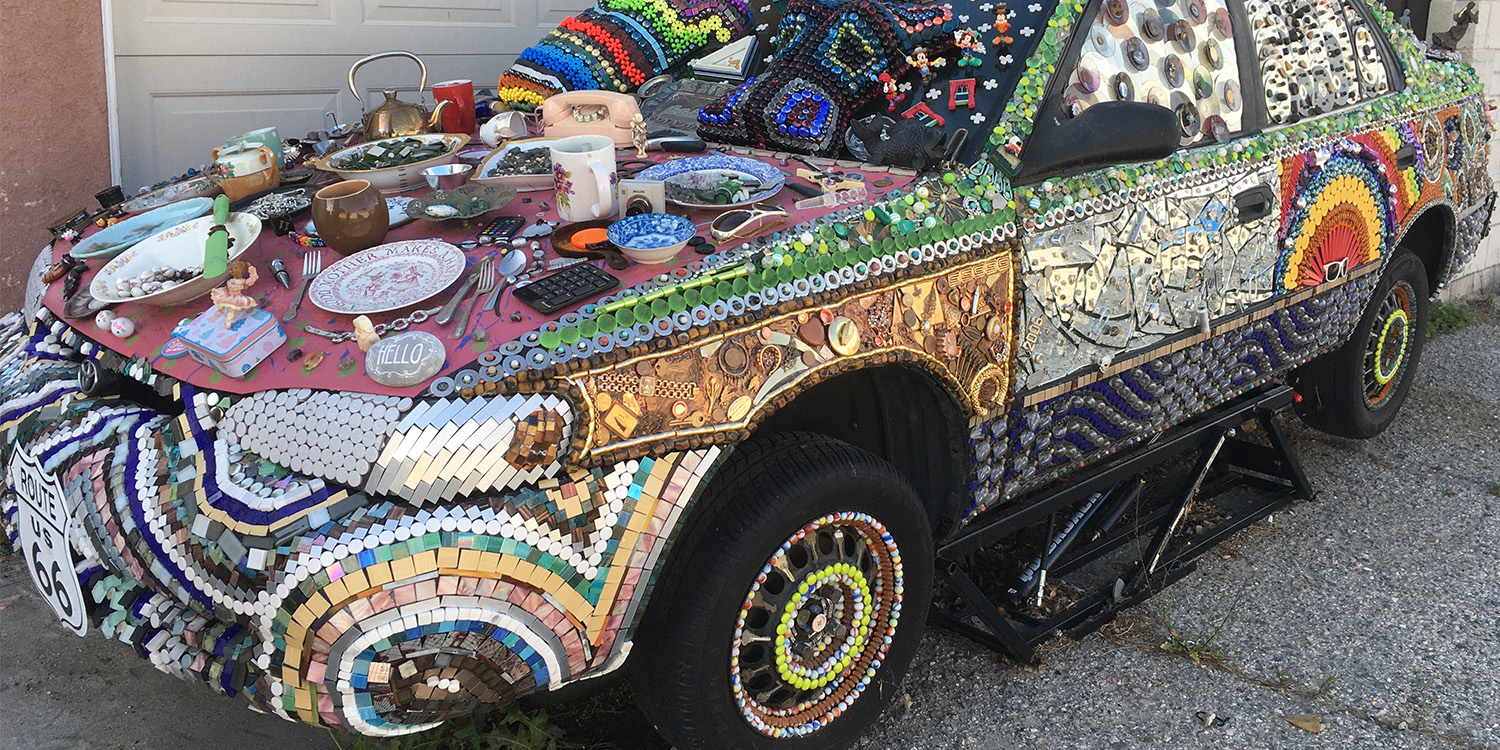 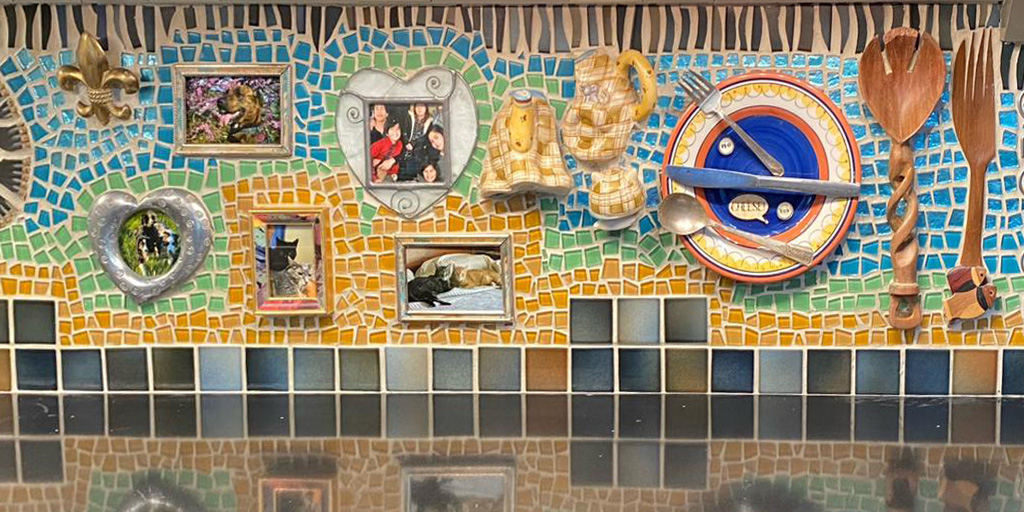 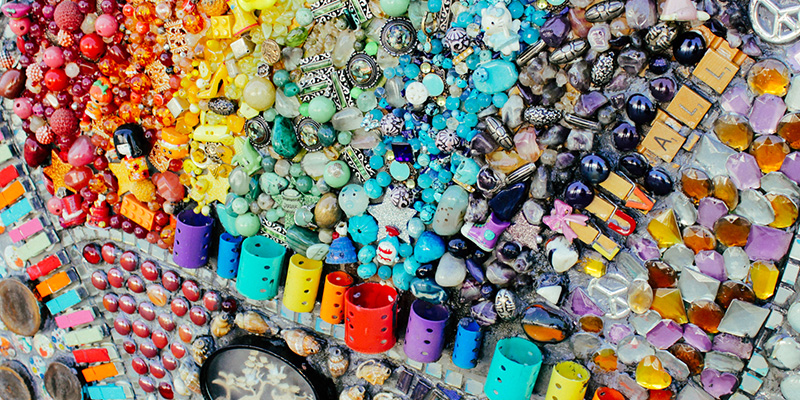 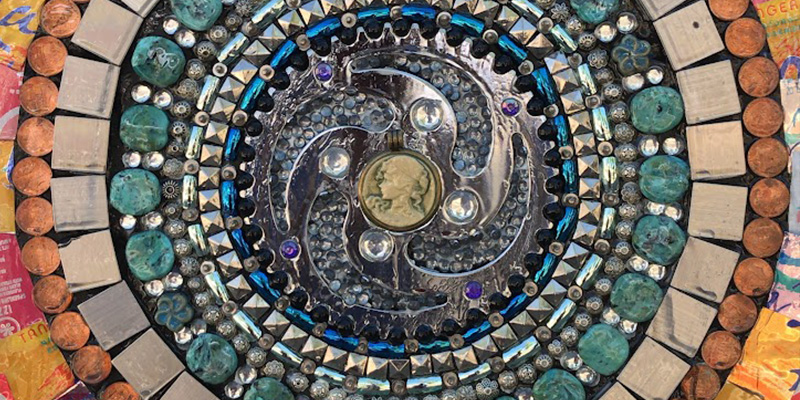 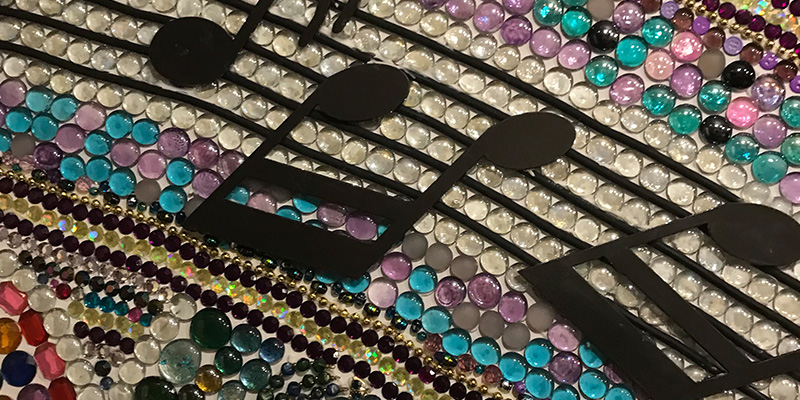 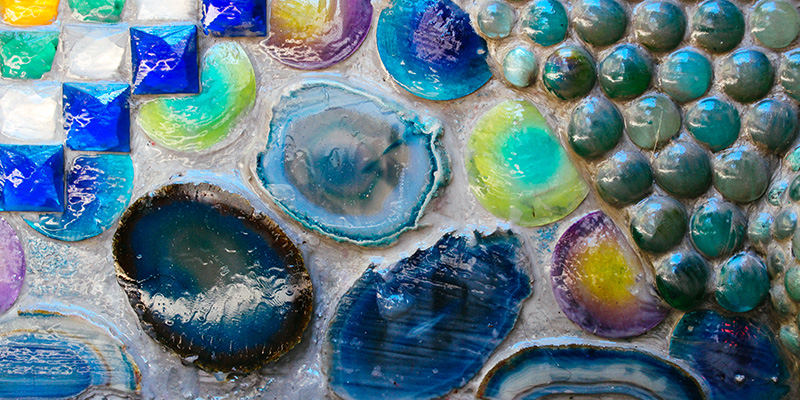 In a rural farmhouse, Renee completed a kitchen backsplash made up of tile, ceramic, and cherished memories of the client’s family. Completed in record time over a holiday weekend, it represents the personal touch of Renee’s largest works, rendered in loving detail that will last for generations.

A 1998 Toyota Corolla became the canvas: blanketed in tiles, buttons, sunglasses, chess pieces, mannequin forms, and images of car culture in sunny southern California. The car’s weight was more than doubled by the artistic improvements, resulting in the most unique example of history’s most popular car.

A massive gray cinder block wall was transformed into a flowing river of vividly colored metal and shattered mirrors. A drab sidewalk strip became a window into an ocean of musical instruments. 100 feet of rope light, 1,200 aluminum cans, and 4,800 nuts and bolts coalesced into an unmissable union of music and life: Renee’s largest work to date at 12 feet high and 45 feet wide, plus 50 feet of sidewalk. Accessible to the public at 11112 Vanowen St., North Hollywood, CA 91605

A motif from “Three Little Birds” by Bob Marley and the Wailers floats through a kaleidoscope of colored tile, charms, and beadwork. All this is placed on Renee’s first fully portable mosaic piece, 8 feet by 4 feet. Music students who pass through the school’s halls are inspired by this synesthetic approach to music.

A music teacher in Studio City commissioned a mosaic on the steps leading up to the teacher’s private studio. Her students are greeted with placid blues, greens, and intertwining motifs of love and music.

8,750 pennies gleam in the afternoon sun on this 27-foot wide mosaic in the center of a loving community. Donations of materials during its construction included toy trains, old keys, grandma’s silverware, a musician’s first guitar, trinkets, keepsakes, and memorabilia. An Angel of Los Angeles, created by the community that loves and protects the artwork, is one of the first things you see before you’re swept away by the wall’s ecstatic spirit. Accessible to the public at 6772 Ranchito Ave., North Hollywood, CA 91405

In the backyard of a 100-year-old house, the Zen Garden began as a quiet retreat from the outside world. Over its yearlong construction, it became the focal point for the house’s energy: circuit boards, credit cards, skeleton keys, marbles, brass pipes, driftwood, and even celluloid film found a home among the mossy tiles and flower boxes filled with geraniums. All of it is united by a fourteen-foot fountain of copper tubing and wire.

Renee Howard is a Los Angeles-based mixed-media artist specializing in large-scale mosaics made from upcycled, discarded, and donated objects.

Beginning with a school trip to Simon Rodia’s iconic Watts Towers, Renee has carried the knowledge that making “that kind of art” is her life’s passion: abstract mosaics made freely for the public.

Southern California’s culture of media, recreation, and mischief are recurrent themes for the Whittier-born artist.

Describing herself as a “former hoarder”, the meditative practice of mounting the things we want to hold on to, but perhaps no longer need, leads to not only monumental works of stunning art, but deeply personal chronicles of the time and place in which she creates each piece.

Renee is currently working on a new project featuring thousands of rhinestones. She resides in the San Fernando Valley with her husband and three dogs.

Art should be in every neighborhood